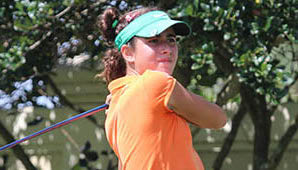 13-year-old Elle Nachmann moved to 5-under on Tuesday and took the lead by herself at the Dixie Women’s Amateur being held at the Woodlands Country Club.

Playing on the East Course, Nachmann put together a 2-under 70 in the second round.

In April, Nachmann, then 12-years-old, turned some heads when she won the AJGA Amino Vital/Joey D Golf Junior Championship and became the youngest winner of a major AJGA event. Nachmann has also won a half dozen Junior Honda Classic’s and a trifecta of Doral Publix Junior titles.

15-year-old Yujeong Son started the day tied for the lead but is now one back following a 1-under 70. Son will start the second half of the Women’s Dixie Amateur at 4-under.

Wenyan Ma and Arizona State sophomore Linnea Strom are tied for third at 3-under while Jennifer Chang, the only other player under-par, is in fifth at 1-under.

Strom, ranked ninth in the Women World Amateur Golf Rankings, put together the round of the tournament with a 6-under 66 to move herself into contention. The impressive second day tally helped her rebound from a 3-over 75 in the first round.

On Wednesday play will return to the East Course for the third round before the final round is contested Thursday at the West Course.