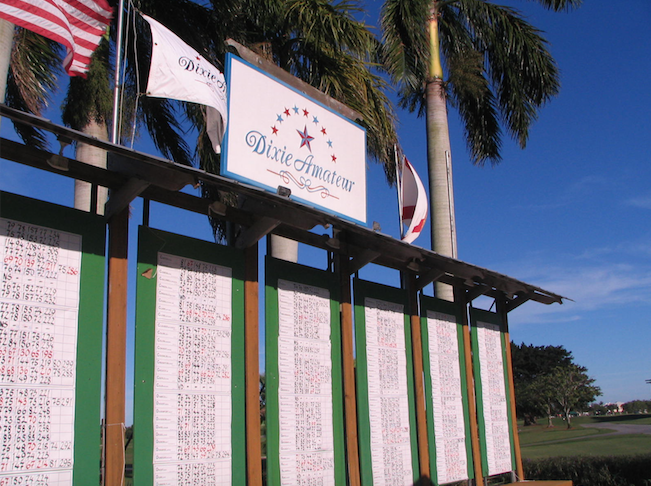 With day one in the books at the Senior Dixie Amateur Ben Whipple and Robert Wagner are leading the way after both players shot 3-over 75’s.

Whipple (Marietta, SC) and Wagner (St. Davids, PA) will carry a one-stoke lead into Wednesday’s second round. Over the years Whipple has had success in AmateurGolf.com events winning five-times from 2009-2014.

His most recent win came at the 2014 AmateurGolf.com Two Man Links at Bandon Dunes.

Beginning the second round in a share of third at 4-over are Ian Harris (Bloomfield Hills, MI) and James Starnes (Ft. Myers, FL). Steven Humphrey (Lexington, KY) is currently in fifth after a Tuesday 5-over 77 that puts him only two behind.

In all eight players will tee of on Tuesday within four shots of the lead.

In the Super Senior Division defending champion Robert Rogoff (Coral Springs, FL) is back atop the leaderboard following a first round 3-over 75. Rogoff will carry a two-stroke lead into the second round over Jeffrey Know (Brecksville, OH) and Keith Keister (Orlando, FL) both of whom are 5-over and sharing second.

Daniel Gregg (Ann Arbor, MI) and Walt Martin (Oakton, VA) are tied for fourth at 7-over.