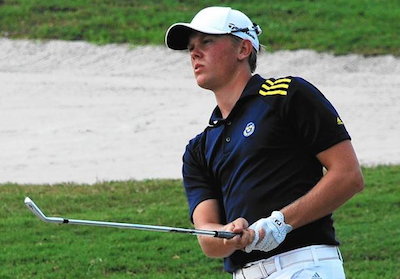 Hannes Ronneblad put on a display of golfing excellence in the final round of the Dixie Amateur, shooting a 5-under-par 67 Tuesday to win the 85th edition of the tournament by three shots.

“He played unreal,” said Troyer of Ronneblad, who had six birdies and a bogey. “There was nothing I was able to do to catch him. He deserved to win.”

“I made it real easy for myself,” said Ronneblad, a junior at Texas Tech who said he is the No. 1 player on the Red Raiders’ golf team. “I made six birdies and they were all inside 6 feet.”

Troyer, of Dover, Ohio, shot rounds of 71-73-71-70 to finish third at 285. Quinn Vilneff of Canada, who plays for the University of Evansville in Indiana, and Cristobal Del Solar of Chile, who plays for Florida State, both shot 69 to tie for fourth at 286.

Nimmer, an 18-year-old freshman at Clemson from Bluffton, S.C., shot 73 to finish in a four-way tie for sixth at 287. Sean Smothers of Pompano Beach, a junior at Mercer University, was the top South Florida finisher at 288, which put him in a six-way tie for 10th.

In a five-way tie for the lead after two rounds, Ronneblad took the lead Monday at TPC Eagle Trace, where he struggled on the hard-to-read greens.

He did handle the wind, which started honking when the tournament began on Saturday, better than he did the first two days and said if he could do it again, he thought he could go really low at Heron Bay.

He got right to it, making birdies at the 2nd and 3rd holes to increase his lead to two shots over Nimmer, who birdied the 2nd. But when Nimmer birdied the 4th and Ronneblad three-putted the par-3 5th for bogey, they were tied.

The long-hitting Ronneblad pulled away on the back nine with birdies on three of the first four holes, sinking putts of 2, 5 and 3 feet to lead Nimmer by three.

“I had a much better feeling after yesterday compared to the first round,” said Ronneblad of his ability to judge the effects of the wind. “Today I gave myself some really, really short birdie putts, which made it so nice. I took advantage of my better wedge play.”

Troyer, who was even on the front, had three birdies and a bogey on the back, but Ronneblad was too far ahead and playing too well.

“I just never really got anything going,” said Troyer, 22, a redshirt junior at Malone University in Canton, Ohio, who underwent two hip surgeries less than a year ago to correct a genetic defect. “I needed a hot start and just didn’t get it.

“He just kept his foot on the gas and never looked back. What he did was fantastic.”

Ronneblad said he thought he was in control after he parred the 222-yard 15th. A birdie at the par-5 16th all but sealed the deal.

“I was pretty confident,” he said. “I knew I just had to keep it together. I didn’t have to make any more birdies.”

The 17-year-old Svensson, who played two groups in front of Ronneblad, said he didn’t know where he stood until he got to the 18th green and someone told him the leader was 5 under for the day.

“I played as good as I could,” said Svensson, who birdied the 1st when he hit his approach an inch from the hole. He eagled the par-5 4th by sinking a 10-foot putt and added three birdies and a bogey on the back.

For Texas Tech golfer Ronneblad, the victory continues an upswing in his golf achievements. In the 2014-2015 campaign, he achieved First-Team Academic All-Big 12 honors, won his first individual title, and recorded six top-10s.

Final scores can be accessed from the “Pairings and Results” menu above.