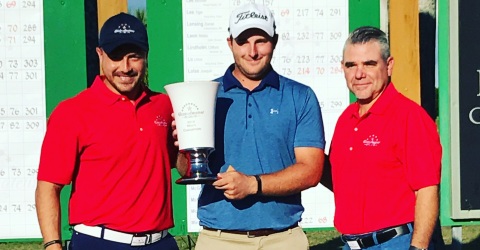 Davey Jude found some final-round magic to claim the Dixie Amateur with an incredible come-from-behind effort.

The former Marshall University golfer entered the final day at Heron Bay Golf Club in second place at 4-under par, five shots behind leader Trevor Smith. Jude, who hadn’t posted a round in the 60s all week, needed to play a flawless round of golf to catch Smith, who showed no signs of coming back to the field.

Jude was dialed in from the start, hitting the flag-stick with his approach on the 1st hole. Unfortunately his ball spun back to 20 feet away but that didn’t stop him from making the birdie. He then birdied two and three and added birdies on holes six and nine to turn in 5-under 31 and take a one shot lead over Smith heading into the back nine.

Jude hit his drive in the fairway bunker on 17 and blasted out to 70 feet from there. His first putt came up short and his missed the par attempt, going into final-hole two-shots clear of Smith.

Struggling with his driver all day, Jude once again found the fairway bunker off the tee, this time buried in the down-slope. He was able to get it out but still had 110 yards remaining for his third shot into the par 4. He then hit his wedge shot over the green into the down-slope of the back bunker. Smith found the green in two, 25 feet from the pin.

“It must have been adrenaline or something,” Jude said of the wedge shot. “Things got pretty nervy at that point.”

Miraculously, Jude’s bunker shot hit the pin and dropped to one foot away.

“The pin hurt me on the first hole but ended up saving me on the last.” said Jude. “If it hadn’t hit the pin it would’ve been about a seven-foot putt. I’m glad I didn’t have to putt that.”

Smith left his birdie try short, leaving Jude a one-foot bogey try for the title. He would knock it in and capture his biggest amateur title to date.

Smith’s even-par 72 was his highest round of the event and put him in 2nd place on his own. Kyle Flexsenhar and Pablo Torres-Hernandez were the next closest competitors at 5-under par while Joaquin Lolas rounded out the top five at 4-under.

Jude joins the list of past champions including: Doug Ford, Jesper Parnevik, Hal Sutton, Lanny Wadkins and more recently Peter Uihlein (twice) and Daniel Berger. He will hope to join his fellow champions on tour one day as he soon will be turning pro and heading to Canadian Tour Q-School in April.