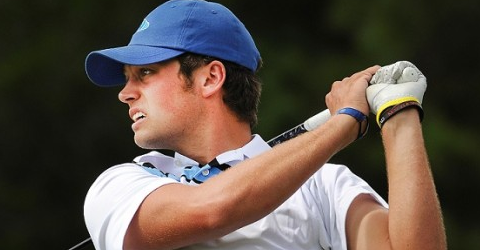 When Trent Wallace stumbled in the third round Trevor Smith was ready to jump at the opportunity to take over the top spot of the Dixie Amateur leaderboard. Playing at TPC Eagle Trace, Smith posted his third consecutive under-par tally to move to 9-under and open up a five-stroke lead of his own.

Beginning the day six back, Smith was able to move in front with the round of the day, a 3-under 69. Smith is a former Coastal Georgia standout where in 2015 he was a two-time NAIA third team All-American.

Davey Jude, following a 1-under 71 will begin the final round in second place and as the closest player to Smith at 4-under. Thus far Jude has posted rounds of 70-71-71.

Pablo Torres-Hernandez and the leader after each of the first two rounds Trent Wallace (Illinois State) are tied for third at 3-under. Wallace was 11-under when they day began but struggled throughout the third round and signed for an 8-over 80.

The top-5 is rounded out by a trio of players sharing fifth at 2-under –Alan Cooke (West Virginia), Joaquin Lolas (Florida State) and Axel Ostensson (USC Aiken).

The final round will be contested at Heron Bay Golf Club and it will begin with nine players under-par.