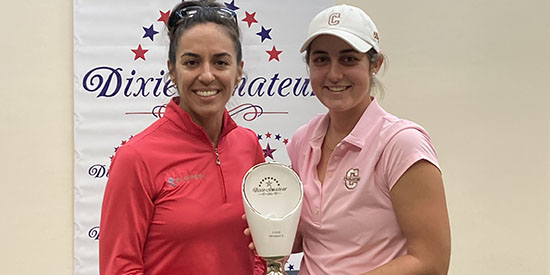 While two players seemingly had one hand on the trophy late in the final round of the Dixie Women's Amateur, it was a third who clutched it tightly after the dust settled at Palm Aire Country Club in Pompano Beach, Fla.

Emma Schimpf, a sophomore at the College of Charleston, defeated Duke commit Katie Li in a playoff to win a championship that seemed was going to elude her, despite turning in a scintillating back nine en route to a final round 3-under 68.

Playing alongside Li and 54-hole leader Kary Hollenbaugh, Schimpf got red-hot down the stretch and birdied holes 12, 14 and 16 to get to 9-under for the tournament.