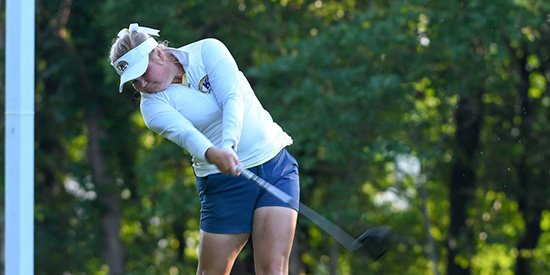 TAMARAC, Fla. (Dec. 20, 2018) – Michaela Finn can’t quite find the right words to describe a fall season in which she finished inside the top 10 in every start with Kent State. She snaps her fingers rapidly instead, trying to describe a newfound confidence in her game.

Finn, the Golden Flashes’ powerful senior, came back from her native Sweden after summer break struggling with her driver but striking her irons solidly. Eventually the driver caught up, her confidence grew and one thing led to another.

“Everything started to…,” Finn said, trying to describe the feeling. “You know when you get confident, you get comfortable.”

Fast forward five months and Finn has exactly the words to explain the reason she’s ending her 2018 season in South Florida, playing the Dixie Women’s Amateur.

“The whole point of being here is so that I can place good and hopefully get enough world (ranking) points that I can raise a few spots on the world ranking for me to be able to play the Augusta tournament in April,” Finn said in reference to the inaugural Augusta National Women’s Amateur to be played this coming April.

At the end of the 2018 calendar year, World Amateur Golf Ranking position will be used to fill a chunk of the field for the inaugural event. The top 30 players from the U.S. will be invited, as well as the next 30 highest players not otherwise qualified. Rough calculations show that Finn, currently No. 63 in the world, may be on the bubble.

The good news is she’s contending at the Dixie. A 1-over 73 in brutally windy conditions at the Woodlands Country Club’s West Course on Thursday bumped her from a share of the lead to a share of second. She is one shot off the pace entering Friday’s final round.

Finn is not alone in her quest. With 11 days left in the year, rankings events are winding down. In fact, the Dixie is one of the last counting events of the year in the U.S., and this year’s field is deep.

Alexa Pano, the 14-year-old wunderkind from nearby Lake Worth, Fla., is playing the Dixie for the fourth time. Pano, at No. 136 in the World Ranking, also appears to be on the outside looking in. But Pano perhaps put it best when it comes to the kinds of stars that Augusta can leave in a girl’s eyes.

“I’ve been dreaming of that since I first heard of the Masters,” she said.

Pano fought admirably through the wind on Wednesday, making a bogey at No. 18 to fall back to even-par 72 for the day and join Finn at 2 under.

Both are chasing Tuan Yu Chiang, a Baylor junior who transferred from Seminole State College at the start of the year. Chiang had a 4-under 68 to reach 3 under and the solo lead.

As for Finn, it has been a hectic fall. She spent the early part of the semester competing with the team and the latter part devoting roughly 30 hours a week to an internship with Ralph Lauren. Finn, a fashion merchandising major, learned how to do everything from stocking to scanning items on the show floor to getting face time with customers.

Even though that left little time for practice, Finn has worked hard to hone her game in the past few weeks. More starts over the summer might also have helped her ranking, but with plans to turn pro at the end of this year, she wanted to spend as much time with her family in Sweden as she could. Finn won’t be going home for the holidays – she’ll be spending it in Ohio instead.

Still, Finn’s ranking, like her confidence, benefited from such a strong fall season. And Kent State benefitted from it all too. With Finn, the Flashes’ leading scorer, on a hot streak, the team won its first two starts and finished runner-up in the next two.

Finn has been an integral part of a team that reached NCAA match play each of the past two years. Last spring, the Flashes fell to Alabama in the first round. Finn drew Kristen Gillman, the two-time U.S. Women’s Amateur champion, and took her to the 17th hole before falling, 2 and 1.

At first, Finn, who is used to the cold in her native Sweden, was not too keen on playing at Kent State given the northern climate. She used an agency to help her find the right U.S. college, and gave her agent a repeated thumbs down to the idea of playing college golf in Kent, Ohio.

“It was the cold weather,” Finn said. “In my head, I was so into going south or going to Cali.”

Then she looked at the numbers.

Kent State has charted a steady climb in the rankings under sixth-year head coach Greg Robertson, climbing as high as 13th in the Golfweek/Sagarin College Rankings at the end of last year. The Golden Flashes finished the fall season ranked No. 9 by Golfweek. The growth pattern wasn’t lost on Finn.

Robertson’s coaching style came into play, too. It was quality over climate.

“He was more into me as a person than just babbling about the school, which I value that stuff more,” she said. “If you have a good coach, you can play at whatever school.”

A Dixie win would go a long way in putting Finn in position for an invitation to Augusta, and with a professional career looming, this will be Finn’s first and last shot at that. Kent State teammate Pimnipa Panthong, at No. 23 in the World Ranking, looks to be in good shape for an invitation, too.

After a blustery day at the Woodlands, Finn was not at all bothered that a single shot stood between her and the top of the leaderboard. That speaks to the way her mind works.