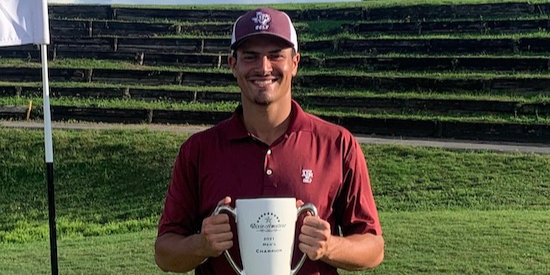 Evan Myers, a sophomore at Texas A&M, made four birdies in his inward nine for a closing round of 6-under 66 to earn a two-stroke victory at the Dixie Men’s Amateur held at Eagle Trace Golf Club in Coral Springs, Fla.

He joins a list of past champions which include the likes of Doug Ford, Lanny Wadkins, Hal Sutton, Brandt Snedeker and Daniel Berger, to name a few.

After carding his second consecutive round of 71 on Saturday which left him two-back of third-round leader Quentin Debove, Myers said he “was just trying to stay in it.”

He did more than that, making four birdies on his inward nine for a 6-under final round of 66 and a two-stroke win over Debove and Christian Castillo. It was an eye-opening victory for the Northbrook, Ill. native, who has seen limited action in his first two seasons for a talented and deep Texas A&M squad which is currently ranked fourth nationally in the Golfweek/Sagarin poll.

“I’ve gotten my ass kicked in college and it’s really helped me learn about my game,” said Myers. The eventual champion found himself 1-over par on his final round before draining an eight-foot eagle putt on the par-5 fifth hole. He narrowly missed a second eagle on the par-5 eighth hole but a tap-in birdie moved him to 2-under on the day.

Myers preceded to pick up birdies on holes 10 and 12 and then hit a 180-yard approach into the wind on the 450-yard par-4 13th to eight feet, setting up his third birdie in four holes which gave him the outright lead for the first time in the entire tournament.

Was the only player in the final group to birdie the 450-yard par 4 dead into the wind. He knocked his second shot to 8 feet from 180 yards out. That putt gave him the lead for the first time in the whole tournament. He converted a 10-foot birdie putt on 15 which led to an inward nine of 32 and a final round of 66, good for a two-stroke win over Debove and Castillo.

“This was the best round of my life so far,” said Myers. “I was really comfortable with my golf swing today and I knew I had to game to make it happen. I just had to wait for the shots to come.”

Debove, a junior at the University of Florida, nursed a two-stroke lead heading into the final round and after reeling off three straight birdies on holes 3, 4 and 5, looked like he might run away with the tournament. However, he gave all of the strokes back in the next two holes with a bogey on six and a double on seven.

The native of Paris, France stayed in the fight with birdies on holes 8, 12, 15 and 17 but came up two shots shy at the end of the day.

“It’s just a crazy game, but I’m feeling very comfortable with my golf swing,” said Debove. “He (Myers) deserved it. He just played better than me today so it makes sense. I know my game is here and it is only a matter of time.”

Ultimately, Castillo’s championship hopes were dashed by one bad hole when he made a double-bogey on the par-4 sixth after his drive plugged in a fairway bunker. After blasting out, he found himself still in the rough then a poor approach from 50 yards out found a greenside bunker, leading to an untimely double-bogey on one of the easiest holes on the course. It was his only blemish of the day during an otherwise suburb final round of 68.

“At the end of the day, one bad course management decision on six cost me,” said Castillo. I take my hat off to Evan. He played great today.”

Ylan Guerin Pozzalo, a 16-year-old from Aix Les Bains, France, had eight birdies on his Sunday card for a final round of 70 to finish in fourth place at 1-under 287. First-round leader Manuel Barbachano of Mexico finished fifth at even-par 288.