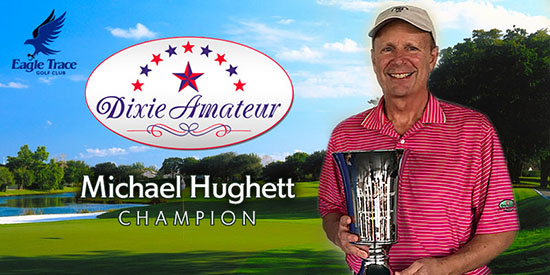 CORAL SPRINGS, Fla. (Dec. 13, 2018) – Michael Hughett (Owasso, Okla.) rallied in the final round of the Dixie Senior Amateur to find his way back to the top of the leaderboard and claim the last major senior amateur title of 2018. Hughett ended his week at Eagle Trace Golf Club with a 4-under 68 that set up a one-shot victory.

Hughett shared the first-round lead with defending champion Doug Hanzel (Savannah, Ga.) then fell off the pace in Round 2. His final round included five birdies and just one bogey at the par-4 second.

For Hughett, the Dixie Senior title represents a solid end to a year that included a runner-up finish at the Senior Porter Cup.

T.J. Brudzinski (Columbus, Ohio) was runner-up to Hughett after also posting a final-round 68. Brudzinski got a late start with a first-round 78, but closed with rounds of 70-68.

The defending champ Hanzel was third at 2 over. Scotty Scott (Hoschton, Ga.), who had a final-round 67 that was the best round of the week, was fourth at 4 over.

In the super senior division, Edward Turner of Richardson, Texas capped off a seven-shot victory with a final-round 75.