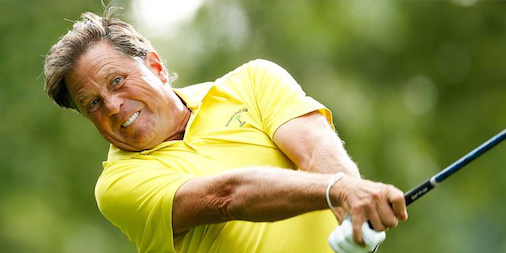 After beginning the day one off the pace James Starnes has moved into the 36-hole lead at the Senior Dixie Amateur being contested at TPC Eagle Trace. Starnes, from Ft. Myers, FL, is currently 7-over following rounds of 76-75.

Ranked fourth in the AmateurGolf.com Senior Rankings, Starnes is looking for his second ranking event victory of the season after claiming the Society of Seniors Founders Cup earlier in the year. 2016 has been a banner year for Starnes in many ways as he has racked up 12 top-10 ranking events finishes and also made his return to a USGA event for the first time in 42 years, competing in the U.S. Senior Amateur.

Ian Harris (Bloomfield Hills, MI) began the day one shot behind and remained a single stroke back after 36-holes. Thus far Harris has put together scores of 76-76 to post 8-over.

Robbie Dew (Palm Beach Gardens, FL) was able to move up the leaderboard into third place with a second round 74 and after a first round 79 he is 9-over.

First round co-leader Robert Wagner (St. Davids, PA) fell to fourth place at 10-over while fellow first round leader Ben Whipple (Marietta, SC) and Rick Ten Broeck (Chicago, IL) are fifth at 11-over.

The Super Senior Division lead has been taken over by Jeffrey Knox (Brecksville, OH). Heading into the last day Knox is 10-over and ahead of second place Jim Dubois (Coral Springs, FL) by two shots.

Thursday’s final round will be a shotgun with play set to begin at 8:30 a.m. EST.