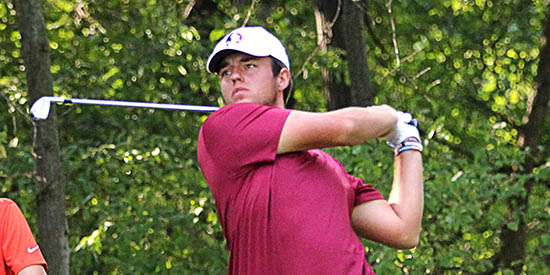 CORAL SPRINGS, Fla. (Dec. 21, 2018) – As soon as Jonathan Keppler woke up on Friday morning and saw the forecast for howling winds in the final round of the Dixie Amateur, he thought he might have a chance. Note that that was a decidedly different thought pattern than the one that would have crossed Keppler’s mind even six months ago.

“Probably my best chance to get into it was a day like this,” said the windblown player who had started the final round at Eagle Trace Golf Club four shots off the pace.

It took Keppler, the 22-year-old redshirt junior at Florida State, a few minutes to catch his breath after winning the event, his biggest tournament victory since…he can’t remember when. If ever there was an endorsement for sticking to the process, then Keppler’s win is it.

Keppler, thoughtful and soft-spoken, hasn’t made a competitive start since a top 50 at the Sahalee Players Amateur at the start of July. It has been a rough semester of golf in Tallahassee, and Keppler didn’t make a single start with the team in the first half of the season.

Earlier this fall, Keppler decided to begin working with a mental coach to take his game to the next level. It was a move that came highly suggested by his coaches, so Keppler dedicated himself to working with Bhrett McCabe, a clinical and sports psychologist who works with a handful of PGA Tour and LPGA players.

“This week has been a big stepping stone for us, and got over a big hurdle,” Keppler said. The goal is for Keppler to learn how to “get out of his own way.”

At Florida State, head coach Trey Jones is big on goal-setting, so Keppler visited with his coach earlier in the semester to set some benchmarks. The list included playing in the last group in a tournament (Keppler did that in Round 3 at the Dixie), be in contention entering the final nine holes and then the one he didn’t really expect: win a golf tournament.

“I’ll be honest, I didn’t expect to win – I know that sounds terrible,” Keppler said. “Having not played a competitive round in five or six months, I just wanted to get some tournament play under my belt.”

It’s amazing what a little confidence will do. Keppler, who let the idea that he could win this event creep into his head after Round 2, put together rounds of 68-72-76-75 to reach 3 under for 72 holes and tie Linus Lo at the top of the leaderboard. Despite bogeys at Nos. 16 and 17 – what Keppler called leaking a little oil – he made a clutch par from sand right of No. 18 green to remain on the number he needed. Ultimately, Keppler won the first hole of sudden death when Lo stumbled around the green.

As for Lo, the redshirt sophomore at Western Kentucky, an erratic front nine (Lo one-hopped his drive at the eighth into a fellow competitor who was standing on the 17th tee) gave way to a controlled back nine that included only two bogeys. He knocked in a 6-footer for par on the last hole of regulation that he thought might secure the win.

Lo had a similar feeling to Keppler about the conditions and remembered a tournament from last year’s college-golf season when he played through driving rain in 32-degree temperatures.

“I feel like the wind was definitely a friend of mine today,” he said.

Until the final round – and frankly, until the playoff – the Dixie had been a Carey Bina show. The 23-year-old entered the week not very well known after having played club golf instead of varsity golf while at Elon. But Bina went 6 under in the opening round at Heron Bay and held onto the lead through the next two rounds as the wind gradually picked up.

In the final round, severe wind gusts forced players to hesitate over the ball or back off repeatedly and add as many as three clubs when playing dead into it. A few too many loose swings in that wind cost Bina. A bogey from left of the fairway on the par-4 sixth preceded a disastrous triple-bogey at the par-3 seventh that played over water and almost dead into the wind.

From there, Bina was playing catch-up. He took off his shoes and rolled up his white pants to go in a water hazard left of No. 8 and play his second shot. He made par on the hole and looked to have the ship righted with a birdie at No. 10.

Ultimately, bogeys on the final two holes spelled the end for Bina, leaving him one shot outside of the playoff and ultimately in third.

“I’m satisfied with how I played and I know as much as I believed that I was going to win this … you learn from everything,” Bina said. “I think this is good because I haven’t been in this position before at such a competitive event. I’m definitely going to learn how to handle myself coming down the last couple holes.”