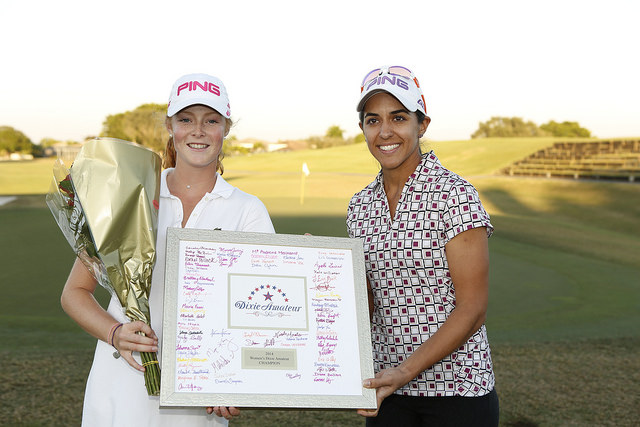 CORAL SPRINGS, Fla. — It was a wire-to-wire win for Lauren Stephenson at the Dixie Women’s Amateur.

The first-year player from Clemson University held a share of the lead or led outright after all four rounds in South Florida. Through the first two days, the Lexington, S.C. native was tied at the top of the leaderboard with Ashley Holder, then with Ashley Burke. But a solid 69 on Friday at Heron Bay Golf Club pushed her two ahead of the pack, and towards an eventual two-shot victory once all was said and done.

The final nine holes on Saturday at TPC Eagle Trace were difficult for many of the top-five finishing players, as just one of the group played the inward nine under par. Stephenson went 1-over, including bogeying holes 16 and 17, while Maria Fassi (second place) and Samantha Wagner (third place) were 2-over during holes 10-18.

One player jumped into the top-5 with stellar back-nine play — Maria Torres of Puerto Rico. Despite a double-bogey on 16, Torres threw in three birdies to shoot 34 and climb into a tie for fifth place with Diane Baillieux of Belgium and Ashley Holder of the University of Central Florida.

But Stephenson’s final-round 74 was enough to capture the big victory, giving her some legitimate momentum heading into her second semester as a member of the Clemson Tigers women’s team. She was second on the team in scoring average (72.67) during her first semester, while fellow freshman Alice Hewson paced the squad a full stroke lower.

Fassi’s 71 on Saturday was the lowest score posted during the final round, and helped her secure an impressive runner-up finish after a disappointing 76 during round two.