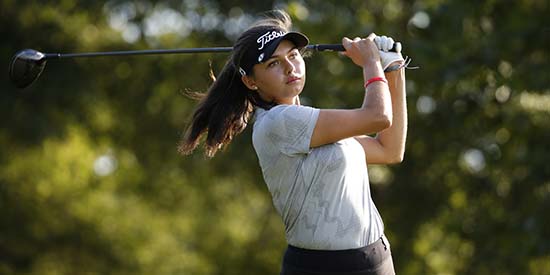 TAMARAC, Fla. (Dec. 21, 2018) – Even as the wind howled at the Woodlands Country Club, Alexa Pano made birdies. She had to – her competitors were making them all around her.

The top three players on the Dixie Women’s Amateur leaderboard managed to dive under par on Friday, benefiting from some of the Woodlands’ tree-lined fairways. In the end, 14-year-old Pano matched her first-round 3-under 69 to reach 5 under for the tournament and hold off Kent State senior Michaela Finn.

Both players had struggled in the wind during Round 3, but Pano seemed to get better the longer she played.

“In the beginning it was definitely a bit of a struggle,” Pano had said the night before the final round, when the last groups came off the course at dusk because heavy winds had slowed down the pace so much.

This is Pano’s fourth time playing the Dixie near her Lake Worth, Fla., home, but her best finish by far. Before this one-shot victory, Pano’s best showing had been a T-6 in 2016.

Pano began her day with three birdies in her first five holes and easily overtook third-round leader Tuan Yu Chiang, a junior-college transfer who spent the fall season at Baylor. Chiang fell to an eventual fourth at 2 over.

Finn, who had a final-round 70 to finish runner-up at 4 under, had five birdies on the day but a rough stretch at the start of the back nine prevented her from winning the title.

Both players, at different stages in their career, entered this field needing a good finish to score some eleventh-hour World Amateur Golf Ranking points in the hopes that they might qualify for an invitation to the inaugural Augusta National Women’s Amateur in April. Invitations will be sent based on ranking position at the end of this calendar year.

As for Pano, No. 136 in the world, the Dixie win comes on the heels of a top-15 finish at the AJGA’s Rolex Tournament of Champions, a Junior Ryder Cup selection and, earlier this summer, a runner-up finish in the U.S. Girls’ Junior.

Alabama junior Kenzie Wright, of McKinney, Texas, finished third at even par after logging the third and final under-par round of the day (1-under 71).

Behind Chiang in fourth, three players tied for fifth at 3 over, including first-round leader Kelly Whaley, Valery Plata and Kerttu Hiltunen.