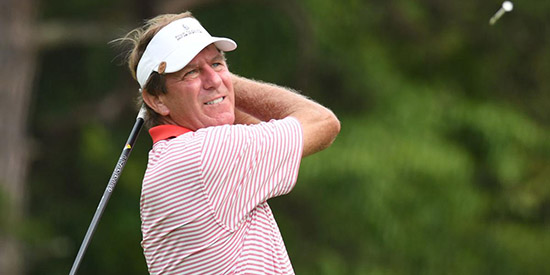 Ray started the day tied for the lead with Joe Shaktman (Ft. Lauderdale, Fla.) at 2 under par, with Elliott a seemingly distant six shots back. But Elliott started hot, with four birdies in a row, and suddenly through six holes he had caught Ray and was just two shots behind Shaktman.

Shaktman would go on to drop four shots in a three-hole stretch, and when Elliott birdied the tenth hole of his round, he was five under for the day and had the lead for the first time.

The key stretch for Ray was making birdie the 11th and 13th holes of his round, while Elliott was dropping his only shot of the day. That flipped the lead to Ray by two shots, and despite a late bogey, he was able to take the lead to the clubhouse. He closed with a 73 and a 1-under 215 total.

For Elliott it was nearly a third rankings event win in the second half of the year, to go along with the Canadian Senior and Crump Senior. But instead he had to settle for a 68 and a solo second place finish. The 2018 AmateurGolf.com Senior Player-of-the-Year will finish third in this year's points race.

For Ray it was a breakthrough in his first year playing the national senior circuit. His previous best finish was a top-ten at the Geranium Senior in Georgia. But he knows how to close, having won two of the last three Senior Amateur championships in his home state of Kentucky.

Shaktman closed with a 77 to finish third at 3 over par. Jerry Slagle (Southlake, Texas) was fourth and the defending champion, Michael Hughett (Owasso, Okla.), finished fifth.

In the Super Senior division, Edward Turner (Richardson, Texas) successfully defended his title by one shot over Fred Stern (Boca Raton, Fla.) with a 5-over 221 total.

For this year's tournament, a Mid-Master division was added for players ages 40-54, and Chad Branton (Cartersville, Ga.) became the first champion in runaway fashion. Branton went wire-to-wire with rounds of 70-70-74 to shoot 2 under, far ahead of runner-up Joseph Crannell (Carmel, Ind.).