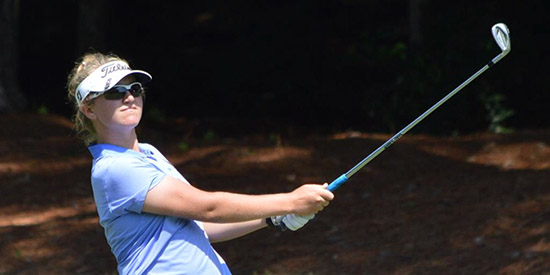 The 16-year-old from Kill Devil Hills, N.C. sits at 6 under par after rounds of 71-67 on two windy days, three shots ahead of a bunched-up chasing pack heading into the final two rounds. Schuster has racked up 11 birdies over the first two rounds, including four in a row on holes 5-8 in her second round.

Another two teenagers are her closest competitors.

18-year-old Maria Bohorquez of Colombia, and 14-year-old Jordan Fischer, a German native living in N. Fort Myers, Fla., each shot a 3-under 69 on Wednesday to pull into into the second and third spots, three and four shots back respectively.

After Fischer, the leaderboard is very crowded, with 29 players within four shots of each other. Six players are a one under par, and among seven more at even par are the defending champion Alexa Pano (Lake Worth, Fla.) and 2015 U.S. Women’s Mid-Amateur champion Lauren Greenlief (Ashburn, Va.).

Pano and Greenlief were among 12 players invited by the USGA for a Curtis Cup practice session in the days leading up to the Dixie.

Scoring is good considering the gusty winds that blew across the course as a cold front moved through. Winds are expected to gust up to 30 miles per hour over the last two days.