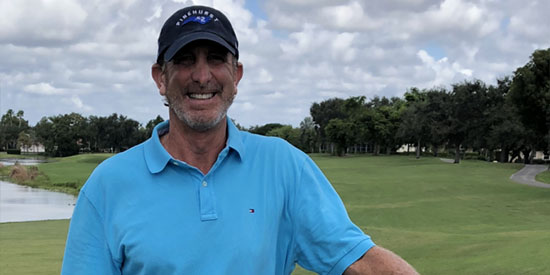 Joe Shaktman took advantage of the familiar surroundings of the Eagle Trace Golf Club in his hometown of Coral Springs, Fla. and came away with his first Dixie Senior Amateur championship on Sunday.

Shaktman improved his score every day, carding rounds of 74-72-71 to finish at 1-over 217, good for a two-shot win over Jerry Slagle (Southlake, Texas) and two-time Dixie Senior Amateur champion Michael Hughett (Owasso, Okla.).

All three players were engaged in a tight Sunday battle until Shaktman gained some breathing room by making three birdies on holes 7, 8 and 10 to go to 2-under on the day. With Slagle and Hughett unable to make a charge, Shaktman’s steady play over the final eight holes was enough to fend off his pursuers.

The Senior Division had 16 states represented at Eagle Trace this week.

Marc Engellenner, a resident of Rocklin, Calif., traveled cross country to win the Mid-Master Division with a 5-under score of 211.

Engellenner strung together rounds of 72-69-70 to earn a five-stroke victory over Jon Lindstrom, winner of the 2015 Colorado Mid-Amateur, and Shaw Pritchett (Montgomery, Ala.). After opening with an even-par 72 on Friday, Engellenner fired a 3-under 69 in Saturday’s second round to open a three-stroke lead over Pritchett heading into the final 18 holes. He capped off a final round of 70 with a birdie on the last to seal the title.

In June, Engellenner, 43, fired a final round 62 to earn a come-from-behind victory at the 100th Sacramento City Men’s Golf Championship at the Alister MacKenzie Golf Course.

The field of the Mid-Master Division was comprised of players from 15 states and three countries.

Stephen Fox (Pinehurst, NC) added to his growing collection of trophies by capturing the Super Senior Division with a 1-over score of 217.

Fox seized control of the tournament on Friday by firing an opening-round 67 which built up enough of a cushion to withstand rounds of 76 and 74 over the weekend and claim two-stroke victory over Steve Humphrey and Edward Turner.

It was Fox’s seventh national super senior win over the last three seasons.