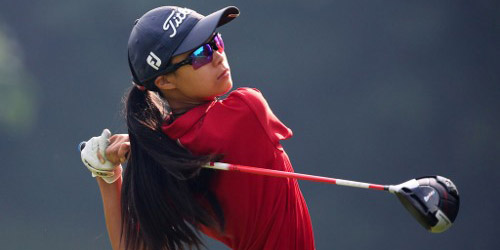 Emily Zhu, a member of the Canadian National Junior Squad, had the round of the day — a 6-under 66 — to take a share of the lead at the Women’s Dixie Amateur with one round to go at Woodlands Country Club in Tamarac, Fla.
Despite the wind and wet conditions, Zhu reeled off six birdies in a seven-hole stretch to get to 5 under par through 54 holes.

She is joined at that number by Mychael O’Berry (Hoover, Ala.), a junior at Auburn University who put together an impressive bogey-free round of 68 on Thursday.

The overnight leader, 16-year-old Katherine Schuster of Kill Devil Hills, N.C., got it to 8 under par for the tournament after three straight birdies in the middle of her round, but lost three shots coming in to fall back to 5 under and a three-way tie with Zhu and O’Berry.

One group ahead of them will be the defending champion, Alexa Pano (Lake Worth, Fla.), who shot a 68 to get to 4 under, just one shot back of the leaders.

Last year Pano started the final round one shot off the lead and took the title with a final-round 69. But there was only one player for her to chase then; this time it’ll be three.