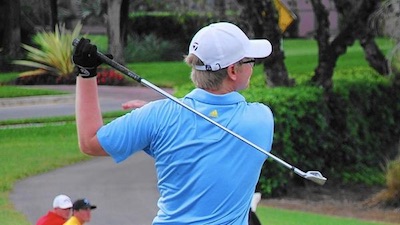 Strong, gusting winds and hard-to-read greens took their toll Monday on all but a few of the golfers playing in the Dixie Amateur at TPC Eagle Trace, as scores were higher and three-putts were plentiful.

Hampus Bergman (shown above letting go of the club after a painful tee shot) had the toughest day when he was forced to withdraw from the tournament because of a back injury.

At the time, the 21-year-old was even for the day and in the lead.

Hannes Ronneblad, Bergman’s playing partner and teammate on the Swedish national squad, ended up with a 1-shot lead after shooting a 1-over-par 73 for a 3-under-par 213 total.

Bryson Nimmer, one of five golfers along with Bergman and Ronneblad who began the day tied for the lead at 4 under, shot 74 and was alone in second at 214.

A third Swedish team member, Fredrik Nilehn, had the lowest round of the tournament, a 6-under 66, to zoom up the leaderboard into a third-place tie at 215 with Ryan Troyer of Dover, Ohio, who shot 71. Nilehm went out in 1-under 35 and birdied five of his last six holes on the back, including the final four.

Five players were tied for fifth place at 216.

The low 72 scorers — 13 over made the cut — play the final round Tuesday at Heron Bay Golf Club, which is where the 85th Dixie began on Saturday. The rest of the field can play in the ClubLink Cup, an 18-hole event at Eagle Trace to benefit Birdies for the Brave.

Bergman, who is considered one of Sweden’s best young players, suffered a disc injury while playing college golf for McNeese State in Lake Charles, La. The Dixie was only the second tournament he’s played in the last year and a half.

He shot 68-72 the first two days and was even for Monday’s round, which he started on the back nine, as he stood on the tee of the par-3 3rd hole.

Bergman hit a 7-iron on the 189-yard hole, then dropped the club behind his back, clearly in pain.

After briefly consulting with the Swedish team coach, Bergman withdrew from the tournament to prevent further injury to his back, which had caused him to walk gingerly on Eagle Trace’s fairways and greens.

“I’ve had trouble standing straight all day,” said Bergman, who was taken by golf cart back to the clubhouse, where he remained.

“I could see that the whole round,” said Ronneblad, who is also 21 and a junior at Texas Tech. “It wasn’t fun to watch.”

Ronneblad had shot 71-69 and said he was finally getting the hang of playing in the brisk winds that starting blowing Saturday.

“It was pretty solid. Nothing spectacular, but solid,” he said. “The first day, I struggled with my approach shots. It feels like I can handle the wind better. If I can bring that to the course, I can go really low.”

He’s also looking forward to playing on Heron Bay’s greens, which are slower than Eagle Trace’s, but don’t break as much.

Ronneblad said he had a birdie putt of 6 or 7 feet Monday that “was the only putt I made outside 3 feet.” Two of his four bogeys were three-putts.

“I hit it well,” he said. “I didn’t putt very good and I didn’t play the par-5s very well, which was the difference.”

Nimmer was 3 over on Eagle Trace’s four par-5s with two pars, a bogey and a double-bogey.

“I played them pretty poorly and I had that problem all day,” said Nimmer, who added that club selection was difficult because the wind would blow at 10 mph, then gust to 20 mph.

And, like Ronneblad, he had trouble on the greens.

“I just didn’t make anything all day outside of 3 feet,” he said. “And I three-putted 18. But it’s a different course tomorrow. I’m more confident out there. Here, the ball breaks twice as much as at Heron Bay.”