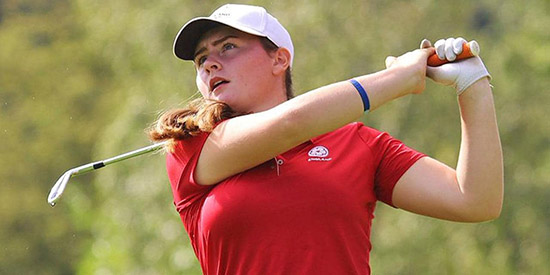 TAMARAC, FL (December 20, 2017) – Lily May Humphreys, the reigning English and British Girls champion on her first trip to the U.S., shot a second-straight 4-under 68 to extend her lead to three shots at the Women’s Dixie Amateur.

The 15-year-old Humphreys’ second round at Woodlands Country Club was sparked by a stretch of four birdies in six holes to close out her front nine. Teeing off in the second-to-last group of the day, Humphreys watched player after player climb the leaderboard on a day of low scoring. Sixteen players shot under-par rounds on Wednesday, with seven scores in the 60s.

Leading the charge was the 16-year-old defending champion Yujeong Son (Norman, OK), whose 5-under 67 was tied for the low round of the day. Son birdied four of her first five holes and ended up 5 under for the tournament, three shots behind Humphreys.

Mimi Chen (Longwood, FL) and UCLA freshman Patty Tavatanakit (Thailand) each shot a 1-under 71 to sit in a tie for third at 4-under 140.

They were joined at that number by University of Arkansas Razorback teammates Maria Fassi of Mexico and Cara Gorlei of South Africa, who both shot 4-under 68s on Wednesday. Fassi started her round five under through seven holes before cooling off.

Aline Krauter, a Stanford commit from Germany who lives in Wesley Chapel, FL, had a bogey-free 5-under 67 to move 20 places up the leaderboard into solo 7th, at 3-under 141.

After Thursday’s round, the field will be cut to the low 70 players and ties.

Lily May Humphreys, in her first trip to America, has taken the first-round lead at the Women’s Dixie Amateur after a 4-under 68 at Woodlands Country Club.

The 15-year-old from Sudbury, England has enjoyed a breakout year in 2017, winning both the English Women’s Amateur and the British Girls’ Amateur championships. She is a member of the England Women’s Squad chosen to represent England in a number of golf championships around the world.

Teeing off in the second group of the day at 7:39am, Humphreys suffered a bogey at the par-three 4th but was flawless thereafter, racking up five birdies and posting the early clubhouse lead that held up the rest of the day.

Three players–Mimi Chen (Longwood, FL), Xin Kou (Windermere, FL), and Patty Tavatanakit (Thailand)–also got to 4-under during their rounds, only to make a late bogey to fall one behind at 3-under 69.

As is happening ever more frequently in major amateur events, the leaderboard is filled with teenagers. Humphreys and Chen are both 15, while Kou is 14. Tavatanakit, a freshman at UCLA, is the elder statesman of the top 4 as an 18-year-old.

Molly Skapik (Miamisburg, OH), a senior at the University of Louisville, shot a 2-under 70 to sit two behind the leader. She is joined at that number by her teammate Meghan Nay (Dalton, GA), a redshirt sophomore, and Nikita Arjun (India) of Armstrong State University.

The defending champion Yujeong Son (Norman, OK), who won by five shots last year, is in good position after an even-par 72.

Alexa Pano, who earlier this year won the Jones/Doherty Championship as a 12-year-old, shot an opening 74.

The Women’s Dixie always draws a deep field, and that is reflected by the fact that 40 players are within 6 shots of Humphreys lead.