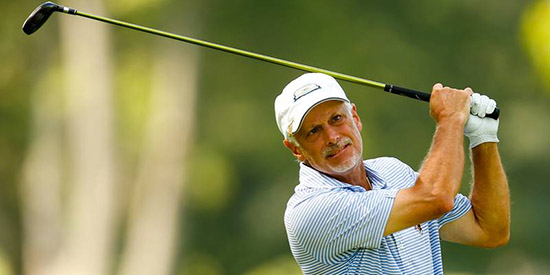 The win caps off a stellar 2017 season for Hanzel, who also recorded wins at the Golfweek POY Classic, the Florida Azalea Senior, the Coleman Senior, the National Senior Hall of Fame, and the Hesler. He has locked up AmateurGolf.com Senior Player-of-the-Year honors as the clear #1 ranked senior.

They say “you can’t win a tournament in the first round but you can lose it”. But Hanzel proved that old adage wrong at the TPC Eagle Trace, racing ahead of the field with his first-round 66 and comfortably cruising to the win.

His lead was seven shots after the first round, five after round two, and finally six after a closing 75 gave him a total of 215, one under par.

Mark Knecht (Paducah, KY) hoped to give Hanzel a scare in the final round, but instead bogeyed the first four holes, allowing Hanzel to go 8 shots ahead.

A triple-bogey 8 on the 5th hole was the only big mistake Hanzel would make on the day, but two birdies on the next three holes righted his ship and it was smooth sailing from there.

Former champion Brady Exber (Las Vegas, NV) was alone in sixth at 11-over 227.

Jeffrey Knox (Brecksville, OH) ran away with the Dixie Super Senior Championship, successfully defending his title by 12 shots. Knox closed with a 72 for a 5-over 221 total.

#1 ranked Doug Hanzel of Savannah, GA is poised to capture his 6th big senior amateur title of the 2017 season and wrap up Senior Player-of-the-Year honors. He holds a five-shot lead in the Dixie Senior Amateur with one round to go at TPC Eagle Trace.

If Hanzel completes the win, it will be his third Dixie Senior title to go along with wins in 2013 and 2014.

His lead was seven entering the day after a sparkling 6-under 66 in round one. Midway through the second round it looked like Hanzel had put the tournament away, getting to 7-under for the tournament and leading the field by ten shots. But a sloppy back nine that included two bogeys and a double dropped Hanzel to 4-under and allowed Mark Knecht (Paducah, KY) to cut the lead in half with a back nine of 34 en route to a 70.

Steve Groom (Raytown, MO), who led the British Senior Amateur this summer before eventually finishing T18, is in third place at 4-over 148, eight shots behind Hanzel and three behind Knecht.

Jeffrey Knox (Brecksville, OH) is one step closer to successfully defending his Dixie Super Senior title, shooting a 75 for a 149 total and a seven-shot lead over Keith Keister (Orlando, FL).

With a splendid first round 6-under 66 Doug Hanzel has taken a commanding lead at the Dixie Senior Amateur.

Playing at TPC at Eagle Trace Hanzel played a nearly flawless round of golf with seven birdies and just one bogey. Hanzel got off to a fast start with birdies on Nos. 1 and 2 before adding additional circles on the 5th, 8th, 11th, 13th and 16th holes with his only slip up coming on the closing hole.

Sitting atop the AGC Senior Rankings, Hanzel is looking to close his 2017 season with his sixth ranking victory of the season. Hanzel has already picked off wins at the National Senior Hall of Fame, The Hesler, Coleman Senior Invitational, Florida Azalea Senior and Golfweek POY Classic/National Championship to go along with five runner-up finishes.

With two rounds remaining Mike Healey sits in second place at 1-over, the 3-over Mark Knecht is third, Steve Groom is fourth at 4-over while in a tie for fifth it is Allen Peake and George Kavanagh at 5-over.

Things are a bit tighter in the Super Senior Division with Jeff Knox leading the way by three-strokes. Knox carded a 2-over 74 on Tuesday as he tallied just one birdie and three bogeys. His lone birdie fell on the 12th hole.

Jim Dubois and Keith Keister are tied for second following 5-over 77’s in the first round.