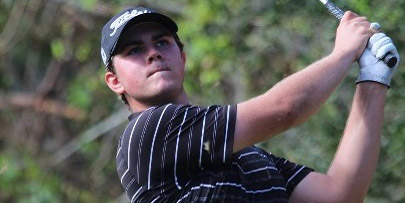 CORAL SPRINGS, FL (December 22, 2017) – With such an international field, it goes overlooked sometimes that for many players, the Dixie Amateur is a home event. From that perspective, Luke Gifford’s tight victory Friday at Heron Bay Golf Club adds local flavor to a tournament with a long and prestigious list of winners. The Giffords live right down the highway from Heron Bay, in Boca Raton. Luke slept in his own bed and ate home cooking, and he had a long list fans to share in the moment.

Gifford was 10 years old the first time he came to this tournament. His father Eric brought him to watch a friend compete back in 2009. That player was Drew Page, who played college golf at Oklahoma State with a handful of names who now compete professionally — Peter Uihlein, Morgan Hoffman and Kevin Tway. Page and Gifford knew each other from playing together at Laurel Ridge Country Club in Waynesville, North Carolina. Uihlein ended up winning it that year.

Uihlein was also one of the names that Gifford listed, incredulously, a few minutes after accepting the Dixie trophy as the sun set on Heron Bay. Now a high school senior, Gifford calls this his biggest amateur victory to date.

“It’s my first amateur win with college players in the field,” said Gifford, who is headed to the University of South Florida next fall to play golf.

Though it makes for a good story, Gifford’s victory didn’t come easily. He opened the week with three consecutive rounds under par, which is something he’s never done before. A final-round 72 got him to 5 under for the tournament, and just one shot ahead of runners-up Diego Cordova, Paul-Louis Gachet and Han Xue.

“Today’s even was my worst round, score-wise, but it felt like a really good round,” he said.

Gifford felt like he was behind the eight-ball from the fifth hole on. He hit his tee shot off line there, and never found the ball. He went back to the tee and made a hard bogey. Coming in, Gifford birdied both par 5s on the back nine.

By the time he stepped up the 18th tee, Gifford knew he had to birdie if he wanted to pull out of the four-man tie at 4 under.

“I hit a perfect 3-wood up the last,” Gifford said. That left him with 60 yards, and from there he stuck it to 10 feet. When he sunk the birdie, he sealed a title that may set his career on a different path.

A day like this seemed to be in the cards for Gifford, who says he knew when he was 8 or 9 years old that golf is what he wanted to do with his life. He has been home-schooled for the past two years, which allowed him more time to practice.

The extra credits he’s been able to pick up through home school should ease the freshmen transition at USF, especially as Gifford balances school and golf.

“Momma did good,” he said, smiling. For the Giffords, a Dixie win was truly a family affair.